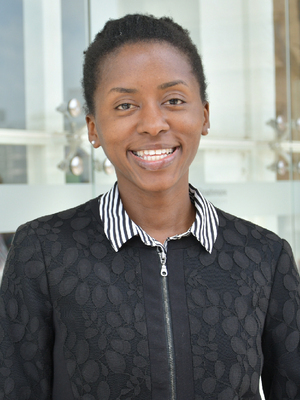 Ahawo holds a Bachelor of Commerce (B.Com), Finance option from Catholic University of Eastern Africa (CUEA). She is also holds a qualification in ACCA (Part 1).

November 2019 to date as one of School Administrators. She is responsible for attachments, Executive Education, support to the Law School Centres and coordinating the Law School activities.

She previously served at World Youth Alliance Africa as the Regional Director based in Nairobi, Kenya from April 2016 to June 2019, prior to this within the same organization she held the position of Regional Director Operations in March 2016. She also undertook training and served at World Youth Alliance Global as an International Intern in New York, USA from January 2016 to February 2016, having served as a Regional Intern in Nairobi, Kenya in December 2015.

In the recent past, she served at Fountain Enterprises Programme as an Accountant in Nairobi, Kenya from June 2012 to July 2013. She has also had the opportunity to be engaged in international organizations such as World Intellectual Property Organization (WIPO) as Budget Intern and Treasury Intern in Geneva, Switzerland from November 2010 to December 2011. Her debut into the international space was at the United Nations High Commission for Refugees (UNHCR) as a Treasury Intern in Geneva, Switzerland from June 2009 to August 2009 and whilst as student from July 2010 to

She is undertaking her Masters Research in Youth Unemployment and Youth Engagement with the aim of making a contribution to policy in Kenya on changing the discourse on ways to bridge the current unemployment gap. She has experience in Youth Mentorship and Leadership Training from young people, gained from her role in World Youth Alliance where she has undertaken multiple forums for the youth in these areas. She is also adept to see young people engage in entrepreneurship so that they can be part of the economic change that is taking shape and is needed in Africa and Globally.

Ahawo has spoken to young people both locally and regionally in multiple forums, sometimes in small groups, clubs, community outreaches, summits and conferences.

These have been in Nairobi, Nakuru, Homabay, Kenya and Uganda amongst others in settings in high schools and universities. She has participated in community work in children’s homes, correctional facilities and environmental initiatives. She has been a champion for the proper understanding of each human person with a focus on educating on human dignity and freedom for excellence among the youth.

She has a love for and demeanor that has seen her serve as a professional Sunday School Teacher as she seeks to see children be impacted from a young age to serve their purpose and be contributors to the community and world at large with their talents and gifts.