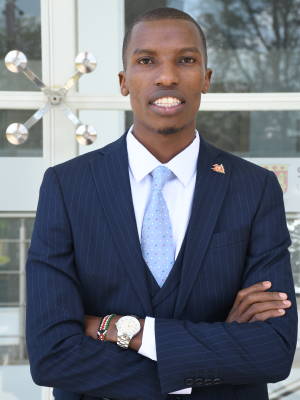 Kipkoech Nicholas Cheruiyot is a Graduate Assistant at Strathmore University School of Law. Cheruiyot is also a research and a technical assistant as Strathmore Dispute Resolution Centre (SDRC). He holds a Bachelor of Laws (LLB Hons) Degree from Moi University, Annex Town Campus. Cheruiyot has an inherent passion in academia, and has engaged in academic scholarship in different fronts. He has written a number of ground-breaking papers, which have shaped both the Kenyan and international jurisprudence. In recognition and appreciation of his scholarly work, he was awarded Justice C.B. Madan award (Student Category) by the Platform for Law, Justice and Society on 7th December 2021. This is an award given annually in memory of one of Kenya’s best Chief Justices to have served in the Kenyan judiciary.

Cheruiyot is also a leader, and has previously served in different leadership positions. As an LLB student, he was among others the Chairperson of Outreach, VUKA-FIT (Market orientation program by FOCUS-Kenya) and Bible Study Sub-Committees of the Christian Union. Cheruiyot also chaired the Law Students Association of Moi University (LSAMU) Constitutional Review Commission, a commission that amended the Constitution of Law students of 1996. He was also the chairperson of Moi University Annex Campus Christian Union (MUACCU) Constitutional Review Commission, a commission that amended the Union’s Constitution of 2005. He later on chaired MUACCU’s Constitutional transition commission, a commission that aided in an effective harmonization, leadership transition and full implementation of the constitutional changes. Cheruiyot has also written a Constitution for Kamara Educational, Motivational and Welfare Association (KEMWA). This is a non-profit organization based in Nakuru County aimed at soliciting assistance for students with financial and such other challenges and mentoring them towards academic excellence.

Cheruiyot has an ardent passion for among others Constitutional Law and Constitutionalism, Human Rights and Democratisation, Property Law, International Humanitarian Law and Health Law.