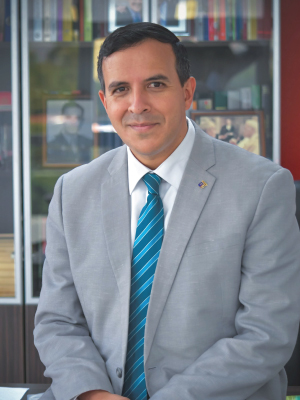 Prof Luis G. Franceschi was the founding Dean of Strathmore University Law School, one of the most reputable and innovative law schools in Africa. Currently, he is the Senior Director, Governance & Peace at the Commonwealth Secretariat. As a thinker, educator, and writer, he loves positive and disruptive innovation. He was the recipient of the 2019 legal excellence CB Madan Award and the 2018 Utumishi Bora National Award. In 2019, he was a visiting scholar at the University of Oxford and U.C. Berkeley Law School. He has been a legal advisor to several national and international government agencies, international and regional courts, the United Nations and the World Bank. He is a Kenyan citizen and now resides in London.

L.G. Franceschi et al, The Constitution of Kenya; A Commentary (Second Edition), SUP, Nairobi, 2019. This is a total revision of the first edition of the only authoritative article by article commentary of the 2010 Kenyan Constitution.

L.G. Franceschi, “The Cost of Devolution in Kenya: A Cost Analysis of the New Governance Framework Introduced by the 2010 Constitution of Kenya and Its Impact on the Country’s Public Finance”, Harvard Africa Policy Review, 2015, vol. X, pp. 28-58.

L.G. Franceschi, “The Misapplication of the Concept of Agency in the Shareholder Director Corporate Relationship”, Business and the Common Good, Edited by Dr David Lutz, Published by the Konrad Adenauer Foundation, Nairobi, 2003

L.G. Franceschi, “The Misapplication of Foreign Constitutional Models in a Multi-ethnic African Society”, C.U.E.A. May 2008

L.G. Franceschi & Emmah Senge, “Mapping the Legal Contours of Presidential Electoral Law in Kenya: A Case Review of Raila Odinga v Independent Electoral and Boundaries Commission”, (Chapter in a volume directed by Cornell Law School and to be published by Springer in 2018 – currently in press.)