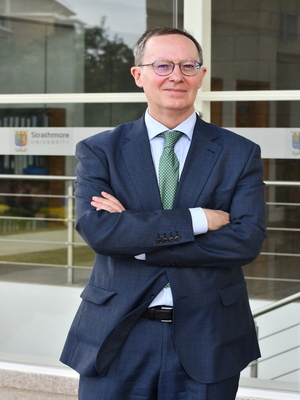 During his years at the University of Navarra, he has served in several administrative positions; Vice-Dean of the Law School (1996-2001, 2005-2007) and Vice-President for Academic Affairs (2007-2016). He has also been a Visiting Professor in Bologna (Italy) at the Scuola di Specializzazione in Dirrito Amministrativo, in Germany at Ruhr Universität Bochum and in Northwestern University’s Law School – Chicago, USA.

He has published extensively on different aspects of Public law from Political theory (intellectual roots of political and legal disaffection) and Constitutional issues (principles for the interpretation of the Constitution, or universities’ autonomy) to particular issues on Energy Law, Environmental Law, Risk Regulation, Town and Country Planning. Most of his publications are in Spanish, but some of the most relevant are published in English and German languages.

Under his supervision, seven doctoral students have attained their PhD qualification, with dissertations on topics related to EU Administrative law. The doctoral topics have been on matters such as food safety, pharmaceutical products, renewal energy, EU mergers substantive threshold mechanism, and environmental protection. To access his publications, click here.

Prof. Lopez-Jurado will take on the role of Dean – Strathmore Law School for one year. We welcome him to the Strathmore family as we accord him utmost support during his stay with us.